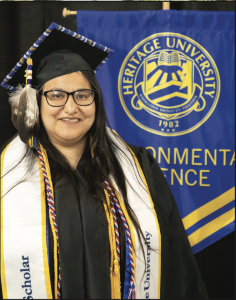 Dehlia Wolftail at the 40th annual Heritage University Commence held May 14, 2022 at the Yakima Valley SunDome in Yakima, Wash.

Dehlia Wolftail has always dealt with life head-on. She hasn’t really had a choice.

“I’ve always needed to think on my feet,” she said. “It turns out the need to survive really helped me navigate my future self.”

Wolftail took that same approach to the climate change throughout her environmental science studies at Heritage University: Do all you can. We don’t have another choice.

Now with a bachelor’s degree under her belt, she’s on her way to the University of Oregon to pursue a fully funded-doctoral degree. She wants to do something to help the people of the Yakima Valley affected by the increasing effects of climate change – what she considers the biggest issue in the history of humankind.

Wolftail’s realistic approach to life was based on needing to make it through a turbulent childhood, one marked by homelessness and uncertainty. She and her two siblings left their parents to live with an aunt in Toppenish when she was nine. Both her mother and father died three years later. Her life was in the hands of the foster care system until she turned 18.

Wolftail wasn’t thinking about college when she graduated from Toppenish High School in 2004. She went to work in retail – what seemed the most logical choice at the time – but soon realized it wouldn’t help her improve her life or the lives of her family members.

So in 2009, she switched gears, doing the one thing she knew would make the biggest difference for her future: She joined the Marines.

“I went in on the G.I. Bill – I did it for the education I would be able to get afterward,” she said. “Those four years of my life paid for my tuition, books and a monthly stipend.”

From the moment she put her feet on “those yellow airport security footprints” to the day she got out, Wolftail says, it was hard. She served four years in active duty, one of them in Afghanistan.

“Everything about you is being adjusted to act like a Marine. You can’t move at will. You can’t wipe your nose, or you get push-ups. You move when they say move.

“When you live through such a tough way of life, and then you return to civilian life, you really appreciate your freedoms and your liberties. You learn never to take anything for granted.”

“I had to think tactically at all times. In doing that, I gained more ability to create more structure in my life.”

To make good decisions, Wolftail says, it’s important to think ten steps ahead. She took advantage of available paralegal training while in the Marines, knowing it would benefit her once she was out. She hoped to pursue a law degree.

Back in Toppenish, she enrolled at Yakima Valley College, earned an associate degree, then enrolled at Heritage to continue her education.

“I love geology, so one course I took was a geology course,” she said. “And there was a lot about the earth and climate change.

“I had been looking at the multitude of social injustice issues on which a person can focus their law degree. All those issues are important, but climate change is even bigger. It’s affecting this entire planet and everyone on it.

“The more I learned, the more motivated I was to try to help.”

As her ideas continued to take shape, Wolftail was determined to make the most of her time at Heritage, which meant doing as many internships as possible. She did four in two years, all during the pandemic, taking advantage of three long-standing Heritage grants – the McNair Scholars program, the Culturally Responsive Education in STEM (CRESCENT) program, and the EAGLES STEM Scholarship Program.

In her internships, Wolftail studied the effects of the organic fertilizer biochar on tree growth in orchards in a water-stressed region. She mentored Yakama Nation tribal students in STEM in the EnvironMentors program, a science education and national college access program.

She worked with Washington State University on the food- energy-water nexus, studying water adjudications for the Colville and Spokane tribes. She then presented that research at the American Indian Science and Engineering Society (AISES) national conference, winning first prize in the undergraduate student poster competition.

She did an internship with EPA Region 10 that helped raise tribal college students’ awareness about air quality on the reservation and presented her findings at the National Tribal Forum on Air Quality.

She found each internship helped her fine-tune her interest. She’s still deciding about a career but knows that continuing her education is key to finding her answers.

Wolftail is concerned for those people of the Valley who are less able to “pivot” when environmental change occurs.

“Increased temperatures and extreme droughts would heavily impact our agricultural industry, which is the main source of income for many families here. Growers would lose their crops and, with that, their ability to pay workers.

“In terms of importance, on a scale of one to 10, I put climate change at a 20. Change needs to happen now. It’s not a Democrat or Republican issue; it’s not just up to the President or one individual or group. It needs to be humanity as a whole to realize we only have one earth, and the work is for all of us and our future generations.

“Especially in this area, changes in our climate are hitting people who, often, their home is all they have. They don’t have money or the means to move if they lose their home to a wildfire or if natural resources dry up.

“Whatever I do for my doctorate, my work will be climate change- focused. Hopefully, the work I do will help many people, including my own.”