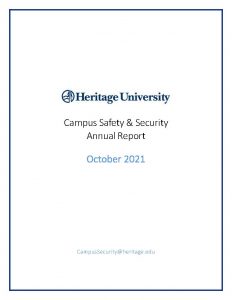 The Jeanne Clery Disclosure of Campus Security Policy and Campus Crime Statistics Act (or Clery Act) is a federal statute codified at 20 U.S.C. § 1092(f) with implementing regulations in the U.S. Code of Federal Regulations at 34 C.F.R. 668.46.

The 2021 report for Heritage University is available here and can be downloaded and printed if desired.

Any additional information can be acquired through contacting the Business Administration Offices at (509) 865-8611.

The law is named for Jeanne Clery, a 19-year old Lehigh University freshman who was raped and murdered in her campus resident hall in 1986. The backlash against unreported crime on numerous campuses across the country led to the Jeanne Clery Disclosure of Campus Security Policy and Campus Crime Statistics Act. The Clery Act, signed in 1990, was originally known as the Crimes Awareness and Campus Security Act.