Champion for the Nation 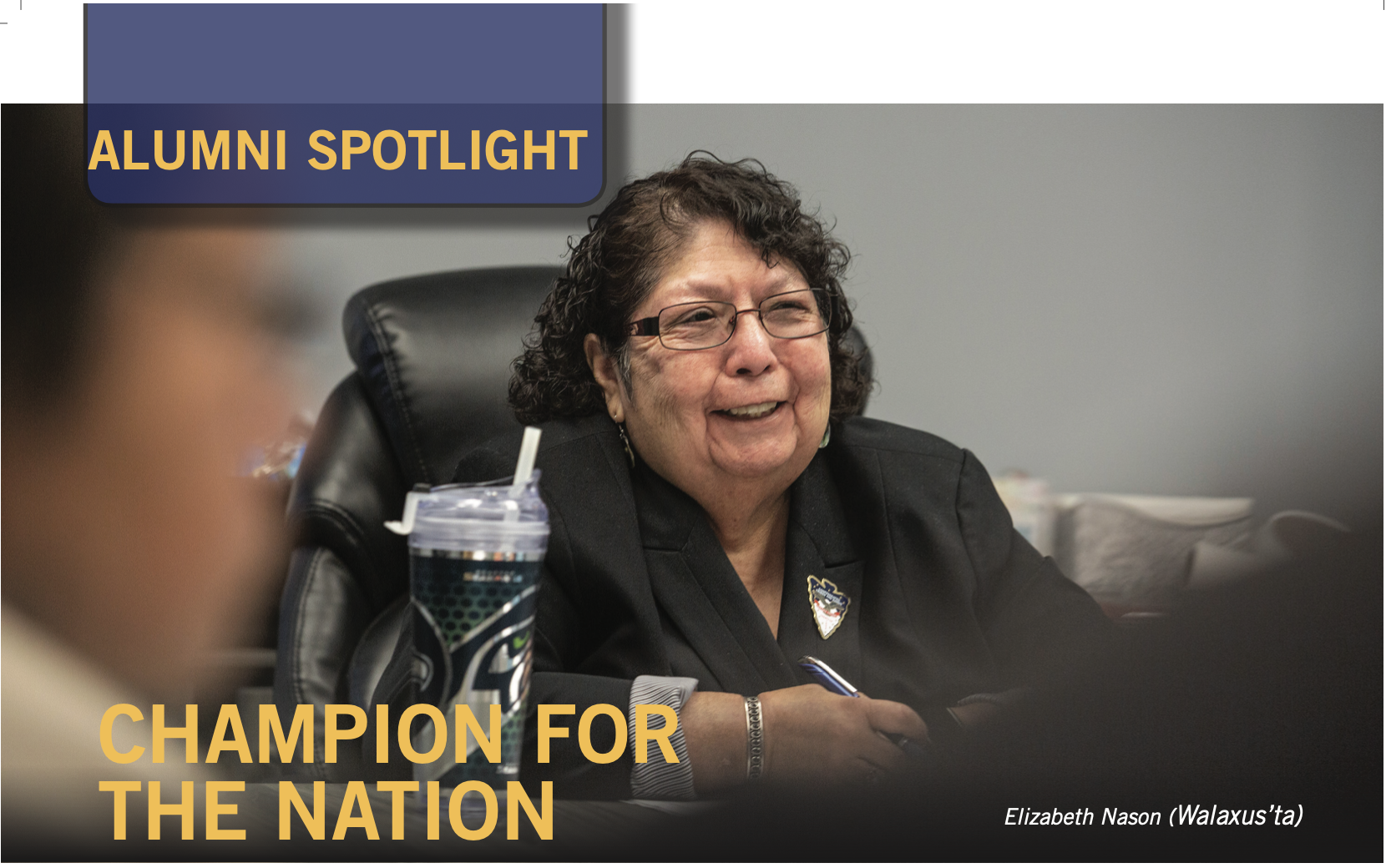 Elizabeth Nason (aka “Walaxus’ta), enrolled member of the Yakama Nation, is a mother, grandmother, attorney, college and law school graduate, softball and basketball coach and enthusiastic fan. She is also the highest-ranking administrative leader in the Yakama Nation, serving as the Tribal Administrative Director since 2013. This humble yet accomplished woman followed an impressive path of hard work, discipline and perseverance to get to where she is today.

Nason was the first in her family to go on to higher education, the first Yakama woman to become a practicing attorney, graduating from the Gonzaga University School of Law, and the first female chief justice for her tribe – all while maintaining a busy household, often as a single mom. How did she achieve so much? She laughs that sometimes she looks back and wonders the same thing because her childhood, while happy, was not easy.

When Nason was born, her mom was just 16, so her grandparents stepped into the parental roles, as they did for a number of her cousins that she affectionately refers to as her brothers and sisters. Her grandmother was a go-getter, and Nason admits she probably learned her tenacious, self-reliant ways by living under her influence.

“Growing up, I had to work each year in the berry fields with my grandmother and the rest of my brothers and sisters,” said Nason. “I had no choice, and this happened until I was in eighth grade.

We worked picking strawberries on the coast and then raspberries in Oregon. My grandmother was a hard worker, caring for sometimes more than 10 of us grandchildren at a time. She dried our traditional fish, canned fruits and berries, crocheted and had her garden. With the little resources they had, they provided.”

Her grandmother was an influential role model, and both of her grandparents encouraged her to pursue her education. She admitted she loved school, loved achieving and being recognized for her accomplishments. Her grandparents insisted she obtain her education not for them, but for her. It’s a mantra she repeats to her own grandchildren today.

During an aptitude test in high school, she learned she had skills for training as an executive secretary. When her husband joined the military after high school, however, she moved with him. Her education was put on hold until they returned to their home town. Once back, she followed the path laid out for her and earned an Executive Secretary Certificate from Yakima Business College.

In 1978, while working as a legal secretary for the Yakama Nation Public Defenders’ office, she learned of the National Indian Paralegal Training Program. She applied and got one of the coveted spots, which required travel during the program.

Her first training site was Washington D. C. She packed up her four-year-old daughter, two-year-old son and a relative to watch them while she was in class. It was then that she decided to go to college. She earned an associate degree and started her undergraduate studies, first at a college in New Mexico, then she moved back to the Yakima Valley and enrolled at Central Washington University, located some 60 miles away from her home. However, the hour-long commute combined with working full-time while managing her household and children was just

too much. She reluctantly withdrew from college. One day, she was driving down Fort Road toward Toppenish and spied Heritage University. She applied and was accepted.

“When I went for registration I met with a counselor who saw my drive and did everything to help me succeed.”

Although she can’t remember his name all these years later, he was the first to pointedly ask her, based on her work background, if she would like to go to law school. Although it hadn’t been on her radar before, she thought about it and answered, “Yes, I think I would.”

From then on, said Nason, the Heritage faculty and her advisor carefully guided her, ensuring she was taking the right coursework for law school. They even brought in tutors for her and another student to prepare for the LSATs.

“Heritage provided support for me in more ways than one,” said Nason.

By then she had four children: Shannon, Kenneth, Aaron and Adreanne. She would work all day, take night classes at Heritage while her sisters watched the kids and return home at 9:00 p.m. to spend time with them. Then after bedtime, she began her homework and started the whole thing again the next morning! If she left work early to attend class, that time came off her paycheck. She gratefully acknowledges that former Heritage President Sister Kathleen Ross and Bertha Ortega, retired chair of general studies, offered her moral and emotional support and strength.

“There were times I wanted to throw in the towel,” admitted Nason. “They became more than administrators; they were also my friends.”

Law school is a daunting amount of work for any student, but especially for a mom with a full load of responsibilities. She remembers hearing a man comment that she would never make it through law school because he barely did it, without kids.

“Well,” laughed Nason, “I made it!” She found time to study, even if it was scrolling through note cards while waiting somewhere with her kids.

“Even when they are in leadership, women don’t give up other roles,” added Nason, who was a master multitasker. “We are caregivers and cook dinner, get groceries and do laundry. I used to joke with the male attorneys in our office that I wished I had a wife or nanny to take care of my kids, too. But you just deal with it!”

After graduating from Gonzaga with her Juris Doctorate, she worked first for Colville Legal Services with the Confederated Tribes and Bands of the Colville Nation, in Nespelem, Washington representing minors. After two years, she joined the Yakama Nation first as an associate attorney and then a lead attorney for the Office of Legal Counsel. She left to work in private practice for several years before returning as the first female chief judge for the tribe in 2002. After her four-year term ended, she took a hiatus from law and took over the tribal diabetes program as its director.

“This was a nice change as it was a positive program that could have life-sustaining outcomes,” she recalled. “ I was able to be part of the design and construction of the diabetes wellness center, which I will forever be grateful to have been a part of.” 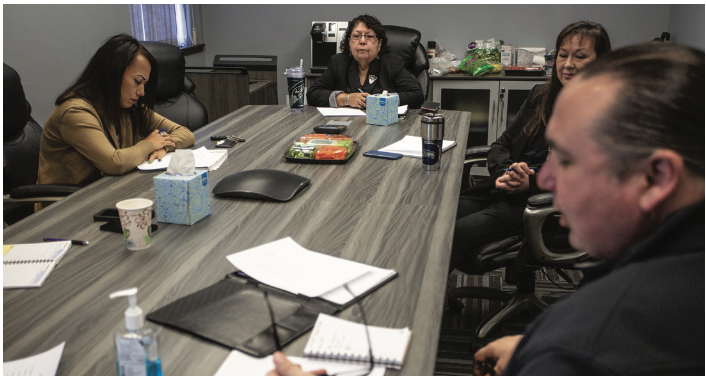 Nason’s days are filled with meetings, like this one with her departments’ deputy directors.

NO DAY IS THE SAME

One day, former Tribal Chairman Harry Smiskin requested to meet with her. He told her the tribal administrative director had resigned, and he needed someone, looking pointedly at her!

Nason was shocked and asked if she could think about it. “No,” he answered. “I need someone now.”

The diabetes program was running well, so she agreed to an interim position… that was seven years ago!

“The daily responsibilities are to provide leadership, administration and management of the Yakama Nation’s governmental organization in the administrative realm,” said Nason. “As the liaison between the Yakama Nation leadership and the employees, I spend a significant amount of time in meetings with our elected leaders as well… I don’t think I have ever had a day where there is a normal routine. It’s interesting, though, because since I’ve been in this capacity, I have learned so much in areas I was not aware of.”

Nason leans heavily on her deputy directors to be her experts in each respective area.

It’s a message she shares with the younger generation, too. The Yakama Nation now offers educational leave to working students so they don’t have to worry like she did about losing pay when they leave work for a class. She urges her employees to take advantage of that opportunity, even if they start with just one class.

Nason has enjoyed a highly successful professional career, making a powerful impact on her tribe and her people by being the first woman to hold many high-level positions. She’s served as a role model to coworkers, not always with intention or overt words, but by carving out her own path, though challenging, through college, law school, in the courtroom and now in administration for her tribe. When asked about her proudest achievements, however, it always comes back to family.

Like her grandmother, Nason has helped raise a number of her alas (Sahaptin for grandchildren). She’s given them the same talk she received as a kid about the importance of education. She’s also passed on a love of basketball and softball, born from her childhood days of playing with her brothers on a homemade dirt-floor basketball court.

Her oldest grandson, her pride and joy, is a high school graduate. Her other grandkids are on the honor roll. She sees more and more tribal members earning associate, bachelor’s and master’s degrees, and she’s happy it’s becoming more of the norm. Some still believe they have too many obstacles to pursue education, and she urges them to rethink that.

“Don’t say ‘can’t’,” she urges them. “I never want to hear ‘can’t’. Leave yourself options and never stop.”