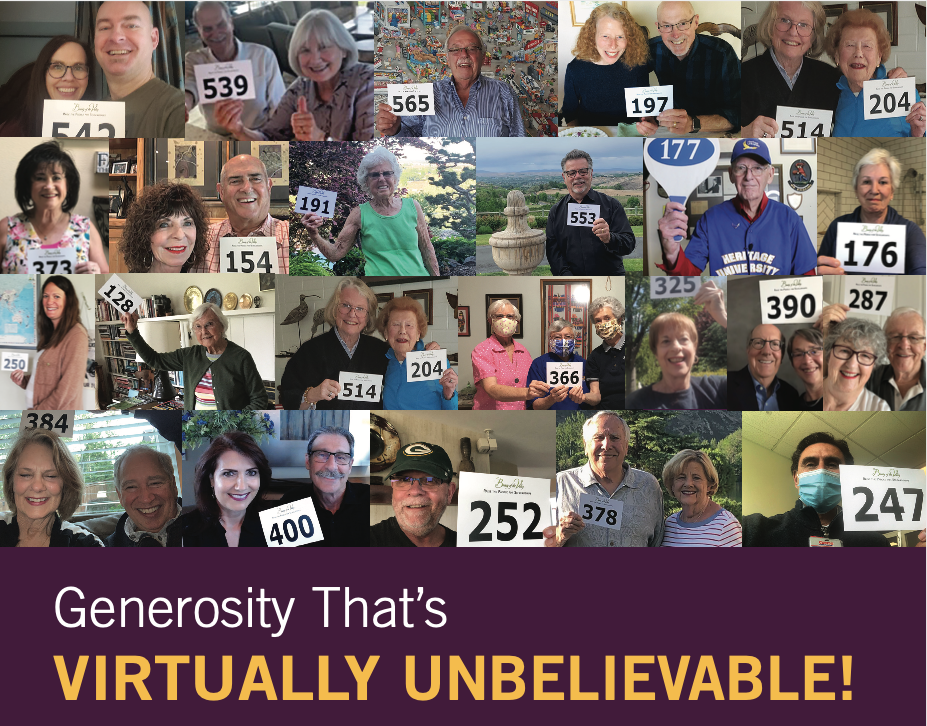 It was a seemingly impossible task, re-imagine the valley’s most successful and time-honored fundraising event in the middle of a global pandemic when standard operating procedures are anything but standard. On June 6, Heritage University’s Office of Advancement proved they were up to the challenge in a big way. The team didn’t just meet their goal; they blew it out of the water. This year’s Scholarship Dinner brought in a record-breaking $851,807.

“Scholarships are critical to ensuring access to higher education, particularly for Heritage students, most of whom are first-generation college students and come from families where money for college is scarce,” said Vice President for Advancement David Wise. “The need for scholarships this year is especially acute as so many students and their families have lost their jobs because of coronavirus, making their dream of a college education even more challenging.”

The 2020 Scholarship Dinner was unlike any other event in the university’s history. The state of the nation precluded any sort of in-person event. There could be no grand party, no gathering with friends, and no dinner. Senior Development Director Dana Eliason explained that planning for the event began months in advance.

“The save the date cards went out in February, and we were just about to send the formal invitations to print when things started to shut down because of the coronavirus,” she said. “Everything, and I mean everything, we planned had to change, fast!”

With no way to bring people together physically, the team began looking at other options to create something that could meet people where they were and where they were was in their homes. The team decided they had to create a virtual Scholarship Dinner, one that would include the signature moments that are the hallmark of the traditional event.

“Whatever we came up with, we knew it had to be memorable and inspirational,” said Eliason. “And, we wanted everyone to feel like they were part of something meaningful. We started our thinking with ‘how can we replicate the magic of the dinner?’”

The team quickly decided to host the virtual event on the same day as originally planned. “Scholarship Dinner is always the first Saturday in June, we wanted to continue that now 34-year tradition,” said Eliason.

They then turned their attention to how they could build something that contained elements of the traditional event in a virtual setting that was engaging and made people feel like they were part of something special. Some things were obvious, like having students share their stories and giving thanks.

“Scholarship Dinner is all about our students. Our donors give to Heritage because they recognize the transformative power of higher education. At the Scholarship Dinner, they realize the returns on those investments through the stories of our students. Hearing about their lives, what they are doing in school, and their hopes for their future,” said Eliason.

Other things took a bit more creative thinking, such as producing the entire program and airing it on an accessible platform. The team already knew they would air the program online, and that would be terrific for its devoted friends, but it seemed that this year presented an opportunity to share the miracle that is Heritage more broadly. Wise decided to shoot for the moon and called one of Yakima’s television stations, KAPP-35 TV, with whom the university has a strong relationship, to see if they would be open to airing the program. 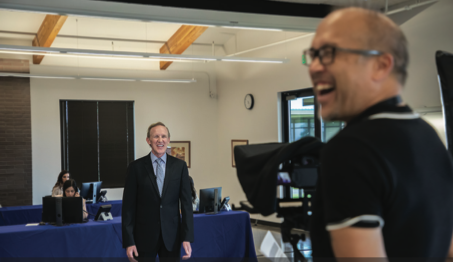 Davidson Mance – front – and David Wise share a moment of levity during the show when the cameras cut away to another segment.

“KAPP is very community-minded and are strong believers in the Heritage mission,” said Wise. “Still, I thought it was a stretch. I was both elated and terrified when they came on board. I was thrilled to have the opportunity to tell the Heritage story to their vast audience, but that meant we had to produce a one-hour prime time television show!”

Thankfully the team had a ringer. Davidson Mance, the university’s media relations coordinator, has a long history as a television reporter and a solid understanding of production elements and how to ensure good flow to the programming. “We could not have done it without him,” said Wise.

With the station’s commitment to air the event in both the greater Yakima and Tri-Cities markets, their support to help produce the program, the team got busy scheduling all of the elements that went into the program. 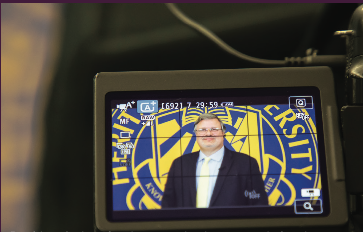 President Andrew Sund, as seen by the camera during the telethon filming.

“When you watch a one-hour program, you don’t see the hundreds of hours of production time that goes into creating the show,” said Wise. “It was important for us to fill the time with interesting, meaningful content that spoke to the entire Heritage story. We had the student stories, of course, and we brought in others, like President Sund, founding president Sister Kathleen Ross, our sponsors, political leaders, long-time donors and members of the board.”

To make the experience interactive, the team included bid cards in the 3-dimensional event invitation mailed out to previous Scholarship Dinner donors. Each was asked to “raise the paddle” and send in selfies with their bid number to be included in the event.

“The interaction of all the members of the Heritage family—the students, donors, faculty and staff, and board members—is what makes Scholarship Dinner successful year after year,” said Eliason. “We were very intentional in building a virtual event that maintained this element.”

It took two months of meticulous work to transform the event. The team promoted it heavily through social media, direct mail and personal phone calls. 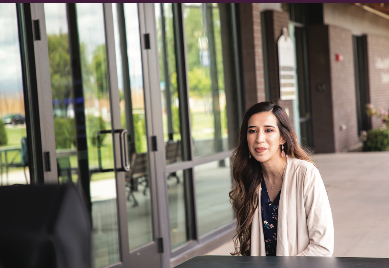 Student speaker Maria Soto tells the story of her academic journey during the telethon.

“Even though we spoke to many of our supporters in advance, we really didn’t have any idea how well it would go on the evening of the show,” said Eliason. “There were a lot of factors that could have interfered with our success. We’re in the middle of a pandemic, the economy is a factor, and there is a lot competing for everyone’s time and attention.”

Then, on June 6 at 7:00 p.m., it was go time. The lights came on, the cameras started rolling and everyone in the room waited with nervous anticipation. Then it happened. The pledges started coming in. They came online, through text and over the phone. The total grew. $450,000! $575,000! $685,000! The team was close to their goal, but not quite there. With seven minutes left in the program, a call came in with a major gift that pushed the total past the $700,000 mark. GOAL! The entire room erupted in cheers of joy. 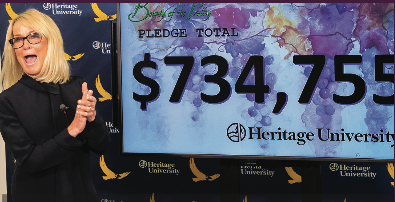 Scholarship Dinner organizer Dana Eliason can’t contain her enthusiasm when the total is revealed at the end of the telethon.

“All that work. All that planning and uncertainty and we did it,” said Wise. “Our small but mighty team, made much bigger and much mightier by all of those who participated in the event, pushed through and did something none of us ever imagined we could do.”

In the final moments of the program, Heritage University had raised $734,755! The total climbed to more than $850,000 in the weeks following the airing of Scholarship Dinner. It is the most the event has ever raised for student scholarships at Heritage!

“We are all beyond humbled by the magnitude of the support shown by our many generous friends,” said Wise. “The success of this event is inspirational in so many ways. Not only is it illustrative of the level of caring for our students and the commitment to ensuring that college degrees remain accessible to students in our community, but it demonstrates how much good we can do when we work together, especially during trying times.” 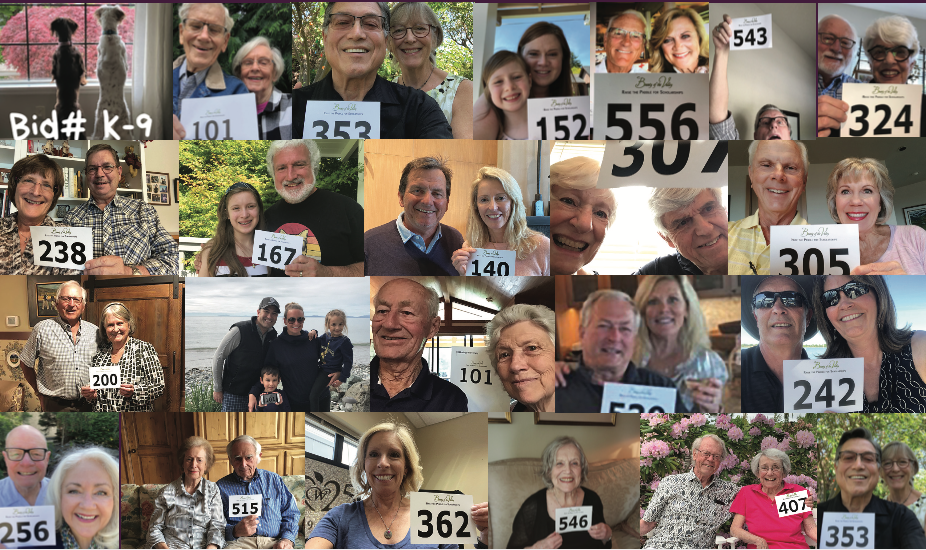