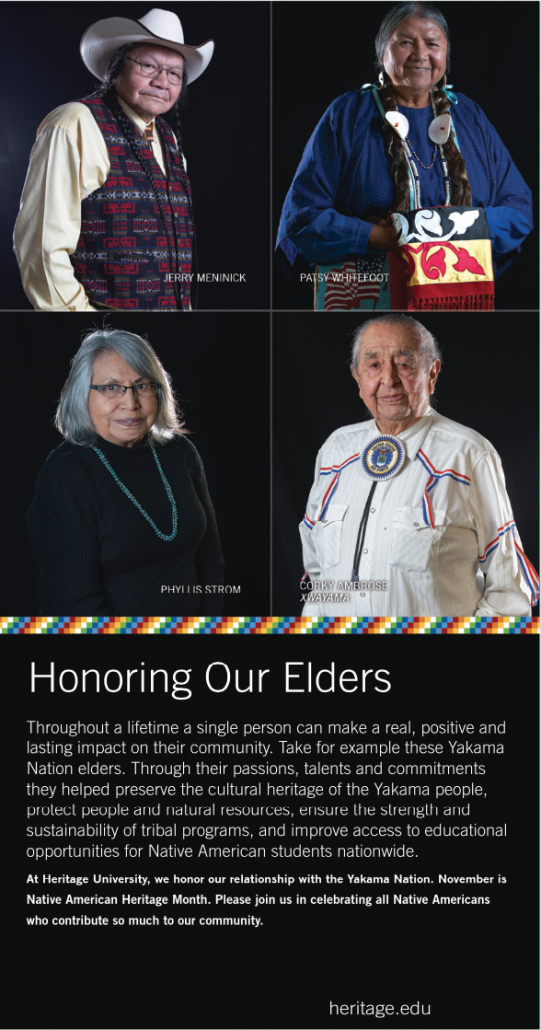 Toppenish, Wash. – November is Native American Heritage Month, and Heritage University is celebrating by honoring four Yakama Nation elders for their lifetime contributions to the Yakama people and their community. This year’s recipients are Corky Ambrose Jerry Meninick, Phyllis Strom, and Patsy Whitefoot.

CORKY AMBROSE served in the US Air Force, and after returning to civilian life, he spent the next 40 years protecting natural resources of the Yakama Nation as a forester and then as a woodland firefighter. He supports fellow veterans and serves the community through the Yakama Warriors Association, an organization he helped found in 1992.

JERRY MENINICK is passionate about helping the people of the Yakama Nation thrive through the preservation and practice of their cultural history.  It grew into a profession when he started collecting elders’ stories about the Columbia River for a preservation project with the US Forest Service, and into a passion when he was elected to Tribal Council and later became Chairman.

PHYLLIS STROM spent most of her years looking out for the welfare of her people of the Yakama Nation. A bookkeeper by training, she spent 35 years safeguarding the strength and sustainability of many tribal programs. Additionally, she sought new funding sources to provide additional services to the Department of Natural Resources, Human Services and Law Enforcement, while continuing to ensure services to manpower and career enhancement programs to assist Native Americans in becoming self-sufficient and build careers to sustain their livelihood.

PATSY WHITEFOOT is not afraid of confronting injustices. She’s spent a lifetime fighting for the rights of Native peoples everywhere. She’s been a strong voice for change at the state and national levels calling for improved access to educational opportunities from preschool through college for Native American students. President Obama appointed her to serve on his National Advisory Council on Indian Education. She’s brought attention to the need for improved mental health and addiction services for Native Americans and is a leader in the movement to draw attention to the plight of missing and murdered indigenous women both on the Yakama homelands and across the nation.

The four elders are being recognized during the fifth annual Honoring Our Elders ceremony at Heritage University on Friday, November 8, 2019, at 10:00 a.m. This event is by invitation only. Also, their stories are featured in a series of full-page ads, each dedicated to a specific elder, that are running in the Yakama Nation Review throughout November.  Framed copies of these ads are being added to the permanent display of honorees at the university in the Violet Lumley Rau Center.

Heritage is holding many other events in November in observance of Native American Heritage Month as designated by President George H. W. Bush in 1990. These include:

Heritage University will raise the flags of the Yakama Nation, the state of Washington and the United States during a ceremony featuring the Yakama Warriors. The ceremony will begin at 9:30 a.m. and will be held at the main campus entrance.

Heritage University students, faculty and staff are invited to wear moccasins expressing tribal identity between November 9 and 16 as a way to stand together celebrating Indigenous traditions and culture around the world.

The American Indigenous Business Leaders (AIBL) Chapter of Heritage University will present a Native Round Dance outside the Arts and Sciences Center. A round dance features a group of hand drummers singing traditional songs while people gather around the drummers in a friendship dance. This is called a social dance among Native people.

Heritage University will host an Interfaith Prayer Brunch, where spiritual leaders will gather to share a meal, learn about Heritage and explore ways our various spiritual traditions can support our life at Heritage.

We will host leaders from a diversity of spiritual traditions as we gather in prayer for our week in recognition of the connection we have with the many deep and ancient roots that ground us as we pursue our education at Heritage.

The public is invited to this free dinner which will be held in Smith Family Hall. Doors open at 5:30 p.m., with dinner served at 6:00 p.m. The Yakama Nation Native American Full Circle Scholarship students are invited to attend and be recognized at this gathering.

Indian Horse is an adaption of Ojibway writer Richard Wagamese’s award-winning novel, this moving and important drama sheds light on the dark history of Canada’s boarding schools or Indigenous Residential Schools and the indomitable spirit of aboriginal people.

Join us as we close our week with blessings, smudging, and labyrinth walks in honor of MMIW. We will focus our intention on those who are absent, but are with us in our hears in the sacred circle.