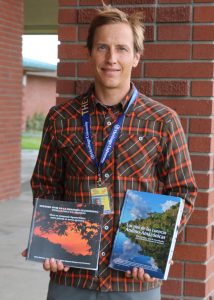 Toppenish, Wash. – A new, one-of-a-kind book written to be a resource for Indigenous communities and leaders, natural resource managers and government organizations in protecting freshwater rivers in the tropical Andes and Amazon has been co-authored by Heritage University Associate Professor Alex Alexiades, PhD.  Los ríos de las cuencas Andino-Amazónicas (Rivers of the Andean-Amazonian Basins) was co-authored by Alexiades and collaborators to help communities worldwide protect their water from pollution. It is being published in Spanish by the Universidad San Francisco de Quito Press located in Ecuador.

Dr. Alexiades says a recent World Economic Forum Global Risks Report ranked the water crisis as one of the five most important potential threats to worldwide economic and social stability. “The water supply in many regions is becoming scarce as demand exceeds supply while contamination increases. Since 1971, this combination has resulted in more than 80% of freshwater species to dwindle in numbers, or become extinct,” he said. “Because of this alarming threat, it’s more important than ever to help communities understand, monitor and protect their freshwater resources. Los ríos de las cuencas Andino-Amazónicas will enable communities to make better resource management and conservation decisions.”

The work by Alexiades and his partners has received financial support from the Latin American Water Fund Alliance, the U.S. Agency for International Development, and the National Science Foundation. The Nature Conservancy and several other agencies collaborated with the authors on Los ríos de las cuencas Andino-Amazónicas for its work to improve water quality in the Andean-Amazon region for both the people and the environment.

Los ríos de las cuencas Andino-Amazónicas is the second book on an environmental crisis authored by Dr. Alexiades and his colleagues. Their first book, Nuestro Vivir En La Amazonía Ecuatoriana: Entre La Finca Y El Petróleo (Our Life in the Ecuadorian Amazon: Caught Between Petroleum and Agriculture), came out in 2018 and detailed the struggles of local indigenous and mestizo communities and their environment as they faced increasing threats from mining, petroleum.

For more information contact Alex Alexiades at (509) 865-0732 or alexiades_a@heritage.edu. To schedule an interview with Alexiades, please contact David Mance at (509) 969-6084 or mance_d@heritage.edu.