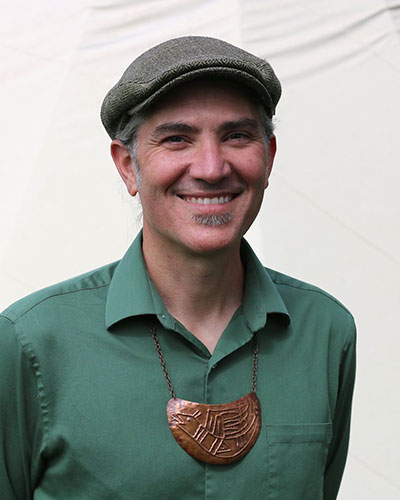 Dr. Sol Neely is a citizen of the Cherokee Nation (ᏣᎳᎩᎯ ᎠᏰᎵ) and an Associate Professor of English and American Indian Studies at Heritage University, where he presently serves as Director of Composition. From 2009-2020, he taught at the University of Alaska Southeast, where he was tenured and promoted to Associate Professor in 2016. He arrived to Heritage University for the Fall 2020 semester with an agenda to “Indigenize” the Composition Program in the interest of decoloniality, cultural safety, and equity.

Dr. Neely earned his Ph.D. (2009) from the Philosophy & Literature program at Purdue University. During his studies, he spent time studying philosophy, art, and existentialism at Charles University in Prague. He also completed Cornell University's School of Criticism & Theory (2007) with distinction. While formally trained in Cultural Studies, critical and literary theory, postsecular phenomenology, and Critical Indigenous Studies, his research and pedagogy primarily address historical violence, memory & counter-memory, and the possibility of repair—focused through the apertures of decolonial justice and tribal sovereignty. He is particularly interested in recovering a rich sense of story lost to much of the Euro-Western literary imagination since Plato banished the storytellers from his ideal Republic. His dissertation, Revolutionizing Maieutics: Literary, Philosophical, and Political Pedagogies in a Time of Disaster, explores oral literary traditions never conditioned by Aristotle, giving focus to Indigenous literatures and Jewish midrashic reading.

Dr. Neely was attracted to Heritage University for two reasons: One, it is a Native American-Serving Nontribal Institution (NASNTI) located on the Yakama Nation reservation; two, its mission prioritizes the twin concerns for student empowerment and social justice. Dr. Neely has maintained a strong focus on student empowerment and activism, which is reflected in his work developing a prison education program called “The Flying University,” which ran uninterrupted from 2012-2020 as a program that brought university students inside the prison for mutual and collaborative study. To learn more, view the documentary here: https://www.youtube.com/watch?v=q-6wwtnE8Ds&t=226s

During the late summer and early fall of 2019, while on sabbatical, Dr. Neely traveled the northern route of Trail of Tears with his father and daughter as three generations of Cherokee Nation citizens. The journey began in Dahlonega, GA, where his three-time, four-times, and five-times great-grandmothers lived before their land was stolen from them during the first gold rush of the United States, and they were forced to Indian Territory (1832). He is currently writing a book of poetry meditating on the transgenerational significance of this journey, tentatively titled Dahlonega (ᏓᎶᏂᎨ): Poems of Displacement in Nine Generations.