Blake Slonecker can still picture it: his grandmother at her dining room table, pencil in hand, newspaper and well-worn crossword dictionary before her. She’s working the puzzle in the Eugene Register-Guard. 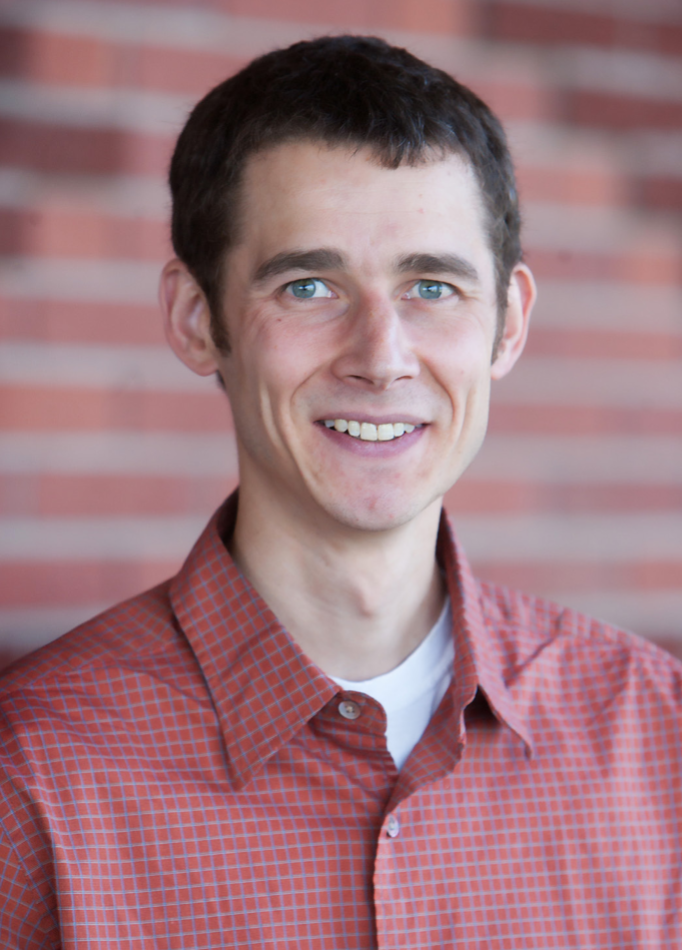 It’s his first memory of crosswords.

“She did the puzzle every day,” said Slonecker. “I remember picking it up around age 10. I didn’t get very far.”

By adulthood, Slonecker, a history professor and chair of Heritage University’s Humanities Department, had become a practiced and skilled crossword solver.

Then about three years ago, he tried creating one. It was challenging – but Slonecker enjoys mastering challenges.

He’s now written more than 40 advanced crosswords and has had 15 of them published in the Los Angeles Times, the Wall Street Journal, and The Chronicle of Higher Education.

On December 10 of last year, Slonecker got an email letting him know he’d reached the holy grail of aspiring crossword creators everywhere.

He’d just have to be patient to see his words in print.

Twenty years since he first started working them, Slonecker finishes the Sunday New York Times crossword – the section’s most difficult of its seven daily puzzles – in about an hour.

He said it takes him an average of five hours to create one.

It was in scratching out puzzles on restaurant napkins that he started thinking about creating crosswords.

“We’d be out to dinner, and my girls would ask me to make them a crossword,” Slonecker said. “It made me think about the relationship between words, clues, and your audience.”

Pre-pandemic, Slonecker would often use his drive time for that creative process – trying to think of well-known phrases with double meanings around which he could build a puzzle.

“A friend asked if I’d had any good ideas lately for puzzle themes. When I said no, he said, ‘You’ve got writer’s block.’ From that, came an idea for a puzzle with famous writers’ names contained in a block.”

Hidden within many crossword puzzles is the “revealer” – a phrase, like “writer’s block,” that gives the puzzle’s theme.

For his crossword “Mixed Greens,” Slonecker’s “theme entries” were popular types of salad greens with the letters in each of those words mixed up.

Last year, Slonecker used his familiarity with the history of 1960s counterculture to create a puzzle for the 50th anniversary of Woodstock. The revealer was “Woodstock.”

“People obviously thought of the concert, but the trick was that I was using it literally – the two words ‘wood’ and ‘stock.’ I had names of trees hidden in the words of the puzzle.”

It’s that kind of clever thought process that’s been the fuel of crosswords since the first one was created in 1913 by a British journalist.

Until recently, constructors used paper, pencil – and, presumably, plenty of erasers. Today, said Slonecker, everyone utilizes software like Crossfire, which is his preference. The constructor does the deep thinking; the software assists the process.

Once you have your theme, said Slonecker, you work with a 15-by-15-inch square comprised of white blocks. You place keywords, come up with filler words, change white blocks to black blocks

“Click on the available squares, and it gives you every word that fits,” Slonecker said.

Though this part may sound rote, Slonecker said it’s a very creative process.

“It’s like being an art museum curator: ‘This piece and this piece will look really cool together!’

“A constructor is really a curator of excellent words.”

When solving a puzzle, Slonecker said, there is an “aha!” moment that comes when the puzzle’s revealer finally makes sense. It’s really satisfying, he said: “Almost like you’ve been let in on an inside joke.”

“When creating a puzzle, there’s the same feeling, but multiplied a few times – like you’re the one letting people in on a really great inside joke.”

A blog called crosswordfiend.com reviews every major daily puzzle published. Slonecker said bloggers reviewing his puzzles have said things like, “great idea – why didn’t I think of that!”

“That’s a major satisfaction: creating a puzzle where the wordplay is so smooth that, once solved, it feels entirely natural and obvious.”

When the New York Times Crossword section sends you a rejection, you know it even before you open the email. Not surprisingly, the subject line is “Crossword.”

Slonecker received about 25 of those since he first began submitting his work, but he knew his work was good enough, so he kept it up.

But that December 10 email last year: It was from the New York Times. Its subject line containedone extra word, whose crossword clue could have been: “A three-letter word for success.”

Slonecker remembers smiling big when he saw it. He savored the moment. He opened the email, read it, then went and told his family his news.

“We had a bottle of champagne that night,” he smiles.

His puzzle will run in the New York Times sometime in the next few months.

As a History Ph.D., Slonecker’s been published many times. He said he figures the number of people reading his scholarly work is probably measured in the dozens.

“But seeing that puzzle? Probably in the millions,” he said.

“It’s very fun realizing that many people are engaging with your ideas.”

Dr. Blake Slonecker invites you to try one of his puzzles. “I prepared this puzzle to share with everybody at Heritage on All-University Day in January 2020. At the time, Heritage’s leadership team included Andrew Sund, Mel Hill, Taylor Hall, Kazu Sonoda, and David Wise; Heritage’s founding President, of course, is Sister Kathleen Ross. And a reminder: clues that require wordplay in order to solve, end with a ?. Good luck!” 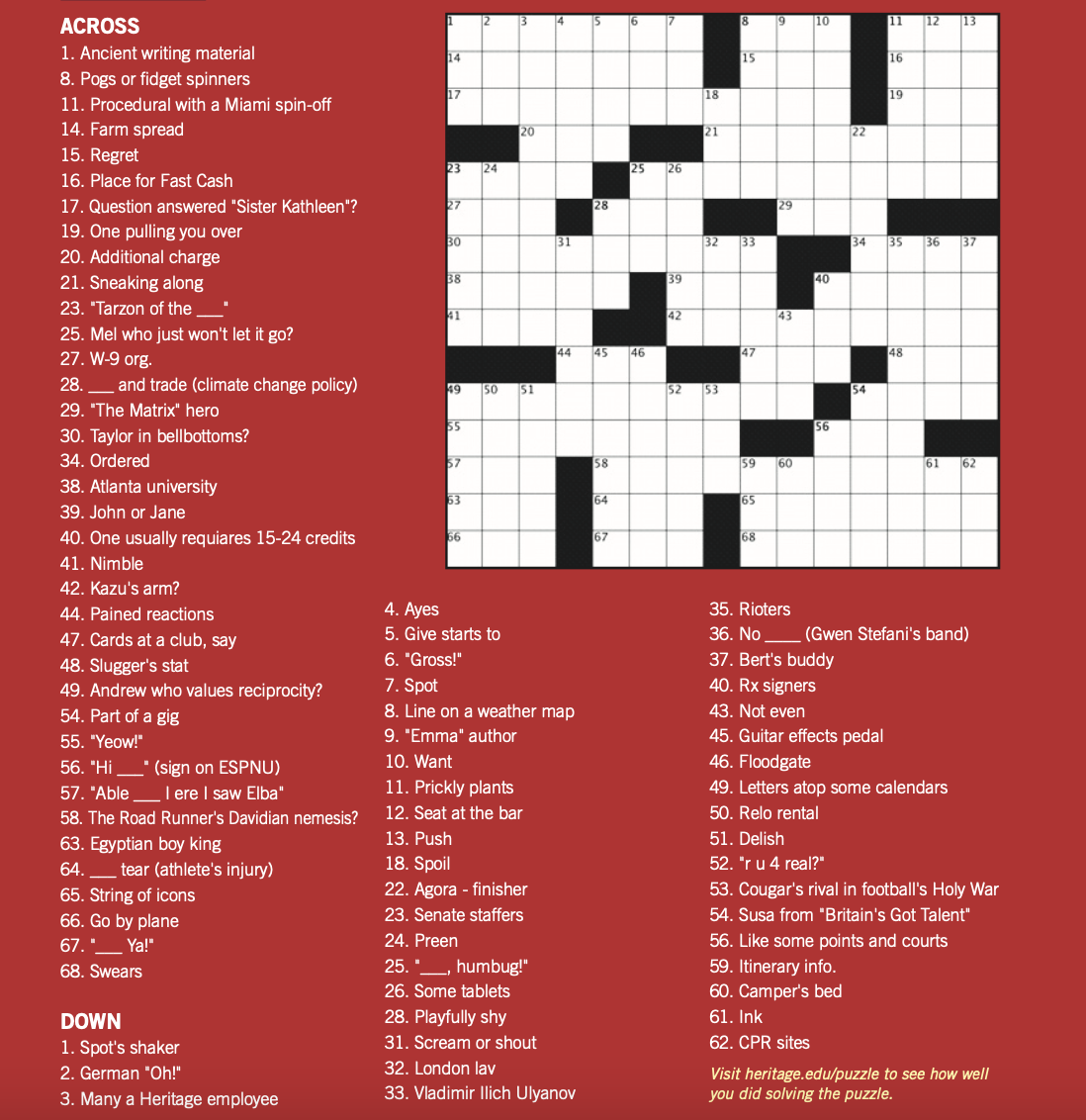 Visit heritage.edu/puzzle to see how well you did solving the puzzle.