United in Our Differences 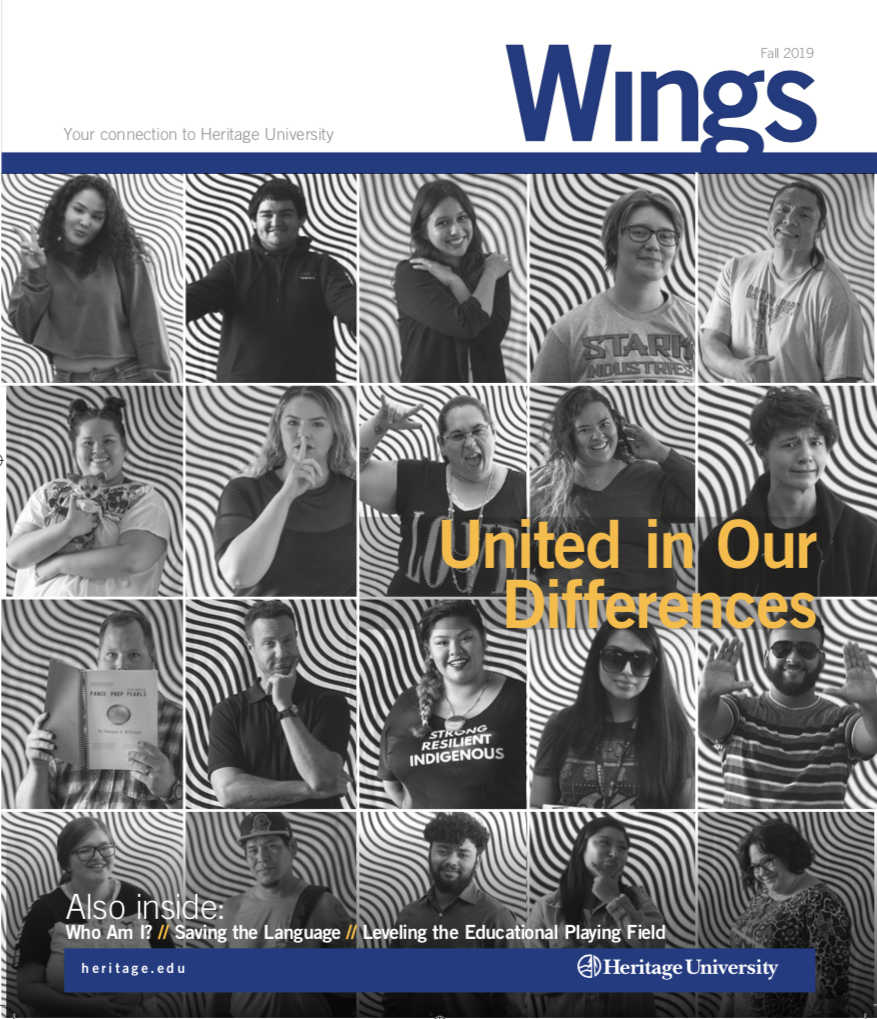 Multicultural education sets students up for long-term success that extends beyond graduation.

Long before Miguel Juarez set foot on Heritage University’s campus, in fact before Heritage even had a campus, an overarching principle had taken root—Heritage would be a college with a focus on diversity and multicultural education. By the time Juarez enrolled, this foundational framework was strongly in place and instrumental in building an academic experience that helped him, and thousands of other first- generation students, find success.

“Multicultural education recognizes the importance of acknowledging all experiences, all voices, to empower students, to help them build their unique skills and talents, and to appreciate the strength that comes when we acknowledge, respect and embrace our differences,” said Heritage President Andrew Sund, Ph.D.

This, he said, is especially important at Heritage where minority students are in the majority.

Students of color make up 86% of the undergraduate population with Hispanic/Latino and Native American students being the bulk of this number.

“I KNEW I BELONGED”

Like so many Heritage students, Miguel Juarez’s path to higher education wasn’t a straight line. He was born and raised in Mexico and immigrated to the United States as a young adult. He spent years working in agriculture, in the fields and dairies of the Yakima Valley. It was hard, honest work, but he wanted more: a chance to go farther than manual labor would allow and a chance to make a difference in the lives of others. Juarez took a leap of faith and enrolled at Heritage.

It was the mid-1990s. Nationally, the college success rate for Hispanic students was less than 15%, nearly half that of Caucasian students not of Hispanic descent. Statically speaking, the odds for Juarez’s success were unfavorable. However, he had chosen Heritage, the university where the founders intentionally put in place practices that would help students like him succeed. 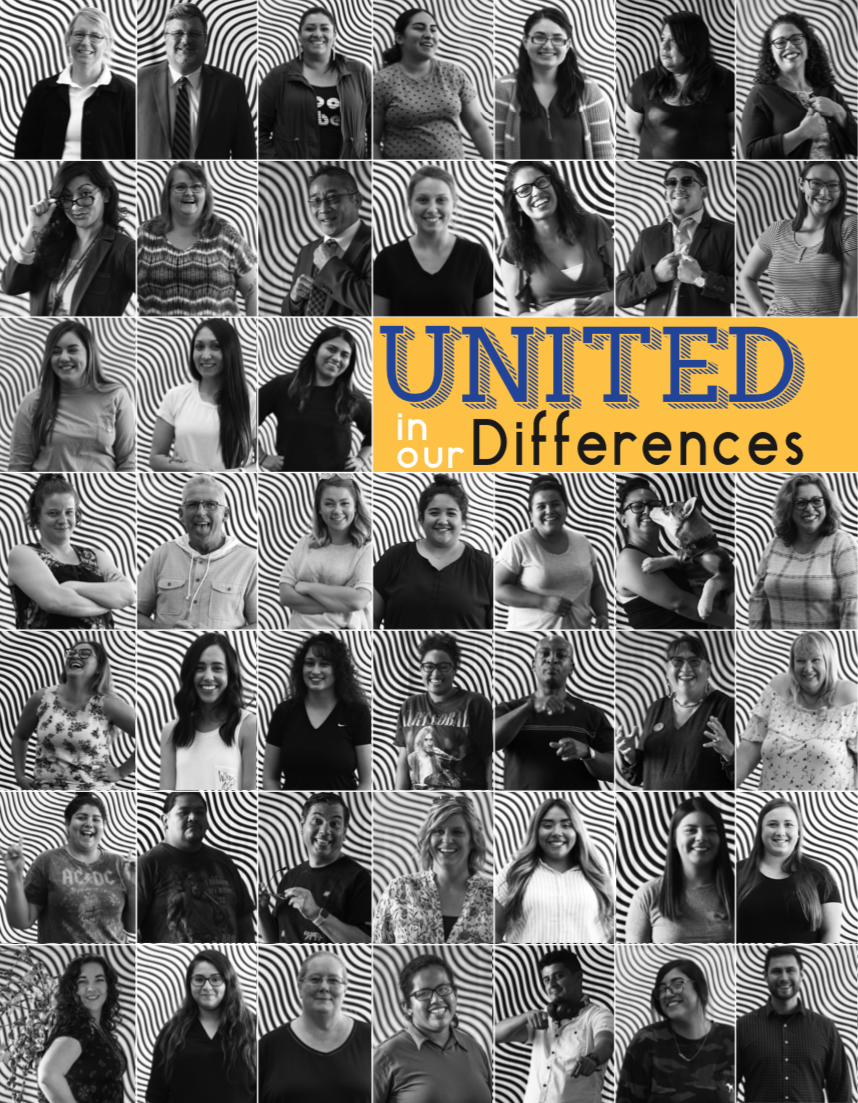 “The first place I went was Student Services, and people there spoke Spanish,” he recalled. “A lot of students looked like me, and I soon found out a number of faculty were Hispanic. I felt welcomed and encouraged from the beginning.”

The support Juarez received throughout his education was critical to his success. He earned a Bachelor of Social Work and went on to earn
a master’s degree. Today, he is back at Heritage, this time as the field director in the Social Work program. And, he is working toward his Ph.D., focusing on a subject with which he’s intimately familiar.

“My dissertation is on success stories of Latino male students. What are the factors that make them stay in school and graduate?”

In writing about successful educational experiences for Latinos, Juarez is telling his own story of thriving at a multicultural university – a story that begins with a welcome, is filled with reinforcement and personal growth, and ends with a promise of successful integration into a multicultural world, a world in which students are prepared to lead.

EMPATHY IS THE ESSENCE

What students like Juarez feel is a powerful force at Heritage, said Professor Yusuf Incetas who is with the College of Education: it’s empathy.

“Once you establish empathy in the truest sense with everyone, you will be on the same frequency. It’s the essence of a multicultural university experience, and it’s the core of everything here.”

Empathy begins with an understanding of the most basic life challenges for Heritage students, which can include jobs, children, and sometimes language issues. Heritage takes a holistic approach, he said.

“It’s the faculty, the staff, the extra services like the Early Learning Center. It’s the celebration of culturally important holidays, such as Treaty Days, El Grito and Martin Luther King Jr. Day. The recognition of our students’ backgrounds is even seen in the types of food we serve in the café and the art on the walls.”

There are specific places at Heritage dedicated to meeting students where they are. The university’s Center for Indigenous Health, Culture and the Environment

works to build partnerships to empower indigenous peoples. The Institute for Student Identity Research helps provide insights into how students’ identities can be engaged as assets and not handicaps in their educational process.

According to Dr. Maxine Janis, the president’s liaison for Native American affairs, a lot of the process of working with students begins with seeing and emphasizing their strengths.

“We talk about support mechanisms that are in place – family, tradition, their own perseverance,” she said. “We flip the script that would look at negatives and look at resilience factors.”

THE DECISION TO SERVE ALL

When people from different cultural groups come together, said university co-founder Dr. Kathleen Ross, respectful conversation and regard for others is crucial.

“We asked if they would like this to be a tribal school. They said, ‘We’re a minority on the Yakama reservation. There are also Latino people, Filipino people, many others. We want everyone here to have a chance.’”

The world has gotten smaller since Heritage’s founding in 1982, said Ross, more interconnected. This, she said, makes conscious multiculturalism that much more important.

“We’ve always had a strong sense of how important it is to be open, to share ideas, to share solutions to issues. It’s even more so today.”

Building a multicultural education involves more than faculty and staff. The students play a role as well.

At the start of each year, faculty come together for Faculty Days, a full day of peer-supported training presented by the university’s Center for Intercultural Learning and Teaching, led by Ed Rousculp and Mary James. One of Rousculp’s favorite presentations was “Uncovering the Discoverable: Having the Courage to Hear Student Voices.”

“Students did photos, painting, poetry readings, music, dance – expressions of their life experiences that had a lot of emotion connected to them,” he said. “They shared with their teachers what they really wanted them to know about their personal experiences in the world.”

It hit faculty in a powerful way, said Rousculp. That kind of sharing of experiences is integral to multicultural education.

Rousculp and James work with faculty to fine-tune their teaching skills, encouraging the use of textbooks and other learning tools that display cultural awareness. They encourage faculty to bring in diverse speakers who work in the field and, ultimately, to encourage students to speak out.

It starts from day one. One of the first classes for freshmen is University 101: Foundations for Success, a required course that looks at the indigenous experience, the immigrant experience, environmental stewardship, and sexual identity.

“It helps them look at diversity, identity, their experiences and those of their fellow students,” said Rousculp. “It’s the beginning of a thread that runs through the entire university experience.”

MORE THAN ONE TRUTH

“Our understanding of the world may be illuminated if we are willing to admit more than one truth,” said James.

The narrative of the dominant culture has always been the dominant narrative, she pointed out. Heritage faculty seek textbooks and teaching materials that highlight the truths of less-heard cultures – for example,

what the signing of treaties was about for Native Americans. They also learn that treaties are living documents that apply to their lives today.

Students “bloom” when they hear voices from their own culture and when they find their own voice, said James. They bloom when their fellow scholars respect and listen to what they say.

“They bloom when they’re comfortable enough to bring their own personal voice into the discussion,” she said. “That’s when we let go. We’re not the leaders of the conversation anymore, they are.”

Students figure out how they want to work together on issues in their own communities and the world.

“From the beginning, we ask students to consider how they can make the world more just,” said Rousculp. “They move from being inspired by role models, to active engagement with each other, to having the opportunity to be people who can make a difference.”

At the end of the day, just how much impact does this type of educational experience have on students? It’s transformational, said Juarez.

“When students start at Heritage, they’re not sure of themselves or their place in the world. They’re reserved,” he said. “But by the time they’re about to graduate, they’ve become leaders. They assertively prove their points, at times even challenging the professor.

“I say, ‘Look at you! Look at the language. Look at the terminology you use.’ Even the way they dress is more confident. It’s reflected in everything they do. They know who they are and what they want to do.”

This newly budded confidence stays with them. Janis takes part in student’s exit interviews shortly before graduation. After four, five, sometimes even six years of being a college student, they are once again vulnerable, facing the unknown and having to take a leap of faith. Students sometimes express their fear of leaving, but Janis reminds them of just how much they’ve accomplished.

“I say, ‘It’s up to you now. And you can do it.’ And they do. Because here, they belonged, and they were heard. Here they found their voice.”